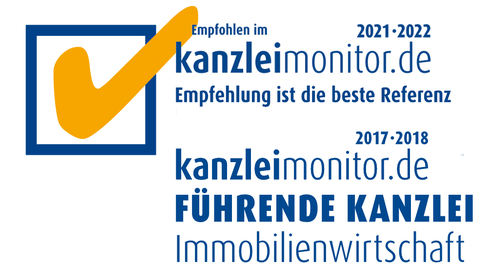 For the second time in a row, in-house counsels employed in the real estate industry have recommended DSC Legal as the “leading law firm” within that line of business (1st place in the national overall ranking). Our firm also belongs to the top-ranking law firms (national and regional) when it comes to its main practice areas shaping the real estate law.

At the end of 2017, the most-recent results of the survey for the annual study “kanzleimonitor.de“ were published. The survey was conducted by the Federal German Association of In-house Counsels (Bundesverband der Unternehmensjuristen, the “BUJ”). For the current edition of the study (2017/2018), 9,820 recommendations by in-house counsels/lawyers from 930 companies were taken into account. 260 recommendations were made by in-house counsels/lawyers employed in the real estate industry.

DSC Legal maintains its top ranking (1st place) in the national overall ranking for the real estate sector (“Immobilienwirtschaft”), once again leaving behind all other law firms (just like the year before).

DSC Legal also managed to consistently take the top ranks in its core practice areas and to be named “hidden champion” again.

DSC Legal has taken the lead in the list of “hidden champions” in the field of finance law (topics: structured finance, loan securities, real estate finance, project finance and acquisition finance). Our law firm is also ranked 3rd in Eastern Germany (incl. Berlin) in the regional ranking for this area of law.

DSC Legal has been named again “hidden champion” in the field of corporate law (topics: partnerships and corporations: foundation, mergers, division into several enterprises, capital measures), due not least to our strong notarial practice.

Our firm was also repeatedly recommended within the very important practice area of mergers & acquisitions (topics: company purchase, merger, bidding procedures, due diligence and post-merger integration). DSC Legal has been named “hidden champion” within that field of law, too.

DSC Legal is a Berlin-based boutique law firm specialized in real estate commercial law. Especially worth mentioning is therefore that we have been able to maintain our top positions in the overall rankings beyond the individual fields of law (regional, supra-regional and national) while competing with numerous other law firms who offer legal services from multiple locations.

In-house counsels in its hometown Berlin voted DSC Legal into 6th place in the overall ranking of all law firms in Berlin. In Eastern Germany (incl. Berlin) our law firm is ranked 13th. On a national level, DSC Legal remains one of the top 100 law firms in Germany.

We thank you very much for the numerous recommendations and look forward to continuing the successful cooperation at our new location Pariser Platz 3, 10117 Berlin (from 22 March 2018).

Additional information on the law firm study „kanzleimonitor.de 2017/2018” and the option to order it can be found at:

Smart and to the point.

DSC Legal is specialized in advising on all legal and notarial aspects of real estate transactions. We advise our international clients in all areas of real estate, corporate and financial law for domestic and cross-border matters.